October was a month for tracking down species that had managed to elude me all year. With the Sharp-tailed Sandpiper, it took taking a ferry to the Island. With the Pygmy Owl, I hoped it would take a lot less travel. It would seem almost impossible to not have had at least one encounter with a Pygmy Owl by now. I had been all over this province, and had not even heard the haunting toot that sends all the songbirds into a frenzy.

I hadn't really worried too much about it, after all, it was almost certain that I would eventually have a run-in with one, especially with October being the best month as the young ones would be spreading out to find their own territories for the winter. But what if I didn't see one? What an embarrassment that would turn out to be. Luckily, Rob Lyske had found one a few days prior at the Cypress picnic area. It would be a cinch.

On a cold sunny morning, I headed for Cypress. At first light, I was strolling the quarry lookout picnic area. It was silent but for the croaking of Ravens, and chattering of a couple Stellar's Jays. As I slipped through the wet grass, I heard a distinctly familiar rattled call overhead. I believe it was a Snow Bunting.


I must have circled the entire picnic site at least 7 times without any success. I know Pygmy Owls can cover a lot of ground over the day, so it could have been anywhere on the mountain, but I knew for sure it wasn't at the picnic area, at least for now. Since today was dedicated to finding this one species, I decided to carry on towards Squamish and check out all the hot spots. Perhaps it could result in something unexpected.

I hadn't come up this way since January 4th, the first outing of my big year. It felt like an eternity ago when I walked the lonely cold beach of Porteau Cove, admiring Harlequins and Oystercatchers. Now, the campground was busy with campers even this late in the year, and the beach was underneath the high tide. A cold wind blew up from the water, bird life almost non existent except for a few usual suspect gulls and some roosting Oystercatchers.


The Squamish Estuary was equally dead. I drove all the way out to the end and walked the jetty towards the end. I flushed a few Song Sparrows but there were none of the surprises I had hoped for. I tried my luck driving the road into Garibaldi Park. Surely I could call in a Pygmy Owl at some point along the 16 km long gravel road up into the mountains. I did not, however, manage to find one, even though the location looked to be prime habitat. My last idea was to return to Cypress park before sunset for one last ditch effort.

This time, I started at the top of the mountain, making stops on my way down in hopes of hearing its call somewhere, or at least catch the frenzy of small birds that usually key me in to the whereabouts of a Pygmy Owl. I walked around the Power line right of way, flushing up a late Hermit Thrush and hearing a Red-breasted Sapsucker tapping away in the fir trees.

I made a few more rounds at the Quarry lookout, thinking maybe the bird would have returned, but it was empty and silent; I guess today was just not my day to see a Pygmy Owl. As the sun sank below the horizon, I left for home.

I coasted down the rest of the winding mountain road to the bottom. As I crossed the overpass to get back on highway 1 towards Vancouver, I noticed a the back lit shape of a bird at the top of a tree to my right.
I almost passed it off as a Robin or Starling, but the shape was unmistakable. Unfortunately for me, I was in the middle of a one way overpass with a car following closely behind. I wanted to stop but I doubt the driver behind would be as excited as I would be about the bird. So I did what any self respecting birder would do: I floored it back onto the highway.

I merged into the traffic going towards Vancouver and booked it to the next exit off the highway, turned back onto the highway going back towards cypress, and hoped that the bird would still be there when I got back off the highway and pulled up to the overpass that I had just crossed minutes before. 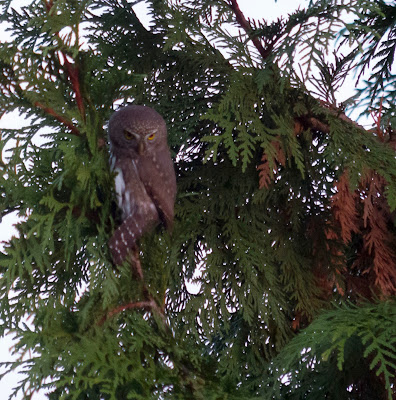 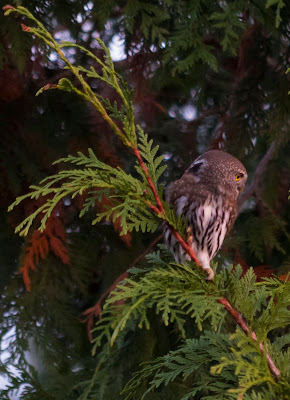 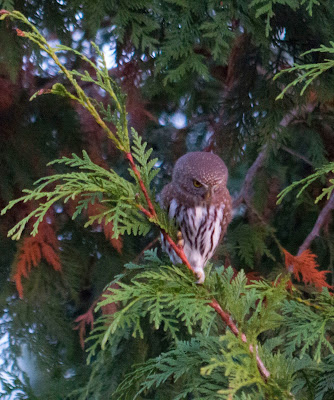