Little Grouse on the Prairie

I must admit I had the title of this post in mind for about six months. I knew eventually I would get to use it, though I didn't think a hunt for Sharp-tailed Grouse would be the last tale I would tell this year. With the way things worked out by the last 2 weeks of December it was the only bird I really had left to see. The Burrowing Owl seemed to only show up when I wasn't looking for it, and with only 3 days off left I had to go for the odds.

On Boxing Day while everyone else was spending their money on marked down electronics, I was driving to Kamloops. I braced for a terrifying trip through the Coquihalla but luckily the road conditions were tamer than expected. By about 11 Am i was scouring Long Lake, Edith Lake, and Goose Lake roads. Back and forth on each of them I drove slowly, stopping and checking all the shrubs I could. A good blanket of snow covered everything so I didn't think it was going to be too difficult to spot one.

Birds were few and far between, aside from a few Northern Shrikes and Mountain Chickadees it was dead quiet. Around 4pm as the sun was setting I decided to call it a day. I still had a long drive back to Vancouver, my hands and feet were frozen and I had to working the morning. The grouse had eluded me yet again.

Things were looking grim. I only had Saturday and Sunday left to see the bird. I got a few tips from legendary Kamloops birder Rick Howie. The Kamloops Christmas Bird Count had seen 15 of them in the general location I had been looking in. He mentioned they liked to travel a lot and could potentially be anywhere at any time. So basically, it was going to come down to luck. I was no stranger to luck this year, be it good or bad. I woke up early Saturday morning, and drove towards Kamloops.

This time however I took the Fraser Canyon by way of Highway 1. I didn't feel like risking the Coquihalla, it was a good choice as the roads up to cache creek were bare. The whole drive the thought kept coming to me: "maybe I should try around Clinton and 100 Mile House". There were lots of Ebird sightings in the area, specifically around Big Bar Ranch and Churn Creek. I had driven that road between Clinton and William's Lake twice this year, the habitat was definitely good. But would the road even be passable for me?

I was close now to the fork in the road where, either you would keep driving into the Cariboo. Or you would turn right to go to Kamloops. I kept going back and forth on what I should do, it was the Robert Frost dilemma times 10. I didn't make up my mind until I had no choice, I kept going strait.

Just north of Clinton I turned onto Big Bar lake Rd. The road wasn't bad, thankfully it hadn't snowed in a few days. The road itself was compact with a light speckle of gravel, I knew people lived out here so the road couldn't be too bad. I followed Big Bar Lake road for 50 Kilometers to where it branches off towards Williams Lake. That road was not in good condition so I could not continue towards Williams Lake, instead I carried  on to the Big Bar Ranch. Scanning every willow shrub around the grasslands, I found nothing.

There was even a Sign at the ranch about Sharp-tailed Grouse. It detailed how important the shrubs and buds were for their winter diet, the grassland Eco system. This just added to my frustrations. By now it was already 12pm and I did not have much daylight left. I turned around at the ranch back towards Clinton. A few kilometers further back I saw a shape on the road. Grouse!!!!

Wrong one. a Ruffed Grouse cautiously creeped across the road. as I passed it I saw two more of them, it was just a big Ruffed Grouse party. I was not impressed but I had expected this. Ruffed Grouse are pretty common in these parts and I had already seen them around here in the Summer.

It was now 1pm and I was starting to panic. I blamed myself for choosing this way over Long Lake road, I blamed Robert Frost and his dumb Path Less chosen poem for inspiring this random decision. I felt a big sinking feeling in my stomach, could I really miss Sharp-tailed Grouse on my big year? It was bad enough I messed up with Rock Ptarmigan but two species of ground walkers? Not cool.

I had abandoned driving slowly and started picking up speed, I wanted out off this road, I had been out here for 2 hours and panic was setting in. I wanted to get back on the highway and try an area near 70 Mile House that someone had told me was a good location. But I didn't know if I would have time. The road climbed a hill and came back down into a bit of a gully, there were some willow shrubs in a small clearing, I stared at them thinking to myself "that's the kind of habitat I'd expect these guys to be in"

And then I saw a roundish shape in the shrubs on the snow. I sort of just stared and drove by dumbfounded. It was like I was so unprepared for the event of actually seeing one that I didn't know how to react. Finally when it sunk in I slammed on the breaks and skidded 30 meters. Then I cranked into reverse and hauled it back to where I saw the shape. "this better not be another Ruffed" 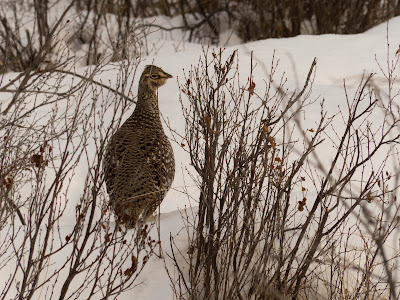 It was not another Ruffed. It was a gorgeous Sharp-tailed Grouse. There were five of them in this little open area. The one closest to me made a few clucking noises as it stood there staring me down. Another one flew into a shrub to eat its buds, I sat there in my car marvelling at them. This was not just my last year bird, but also a lifer for me, and my 380th BC bird all time. 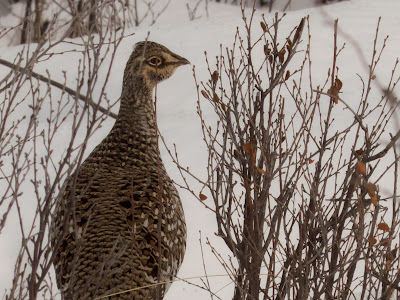 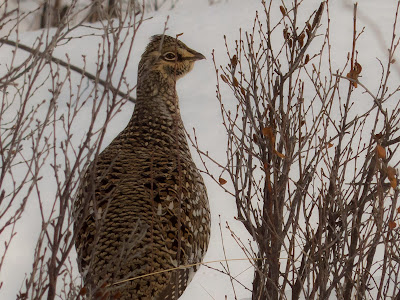 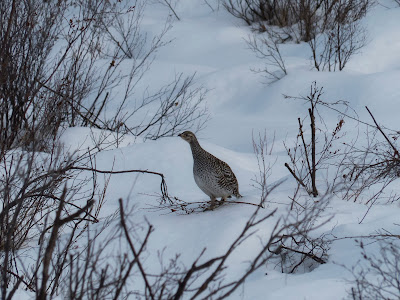 The grouse didn't stick around too long as they heard a high pitched hum of a snowmobile approaching in an instant they had exploded from the ground and flew into some tree's out of of sight. It was a remarkable feeling and pretty much indescribable how glad I was to see these birds. 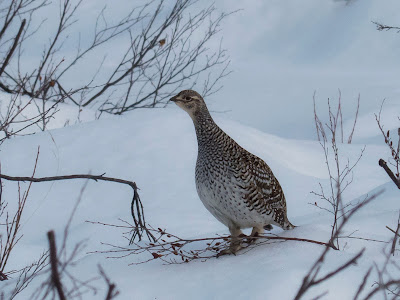