Fort Nelson, the large town before the Yukon. The town itself is like all the other Northern towns in that they have a Highway going through it, and then a residential road on each side that parallels the highway. The one difference that stood out to me was the lack of a Tim Hortons, sacrilege! No matter the coffee up north all seemed to taste weird, and I'm pretty sure its because of the water up North being hard. I remember this being a problem when I lived in the Yukon.

Seeing as I hadn't showered since I had left Vancouver it was time to finally cave in and get a hotel. It would also be nice to sleep with my legs stretched out.

With the few remaining hours of daylight I set out to Parker Lake. The lake is known as one of the better places to find Yellow-bellied Flycatcher. The road going in was rough but passable, I stopped halfway down where the muskeg spruce started. As soon as I got out I heard a distinct "Chebrink". Right away I knew it wasn't a Least Flycatcher, because it wasn't incessant. The call was more nasal and the calls were unevenly paced out.

Finding the bird was a bit of a challenge, after doing some mashing around in the bog I finally had a satisfactory view, I could see the yellowish green belly, its striking orange lower mandible and bright wing bars, sadly not close enough for decent pictures.

I finished the evening following the old Alaska highway back to Fort Nelson. Along the way I made stops to investigate the forests along the road, the amount of Red-eyed Vireos here was astounding. It was like there were 4 singing every 100 meters. 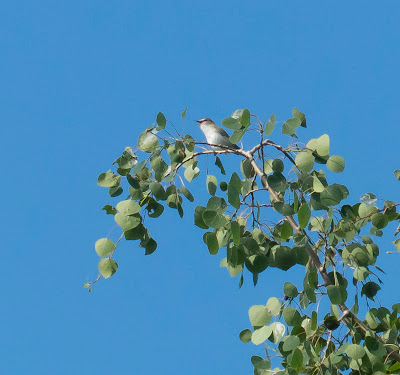 I did my best analyzing each song for a hint of Philadelphia Vireo, but from what I heard they all seemed Red Eyed. A lot of the time the Vireo's were perched right out in the open, something I don't usually come across in the Lower Mainland.

The last highlight of my day came quickly as I finally tracked down a Mourning Warbler. 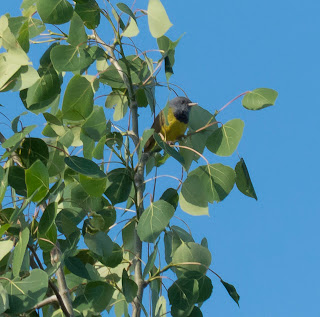 This time I knew right away it was a Mourning Warbler singing, but finding the bird was a task in itself. I kept thinking the bird was lower to the ground in a grove of young trees, but finally figured out i had been looking in the wrong spot, and it was really perched at the top singing. Great way to end the day, I was sufficiently satisfied enough to enjoy stretching out and going to sleep.