I awoke to a Black and White Warbler singing outside my car, when I caught sight of him he looked like a drown rat. The skies had wept rain all night long and the birds looked as miserable as I felt. I spent an hour around Andy Bailey not seeing much of anything while getting soaked in the process.

I drove to Fort Nelson for some much needed coffee, and then it was back towards Fort St John on that lonely highway that seemed endless in its monotony. About halfway there is a small settlement called Pink Mountain, thirty kilometers off the highway on Pink Mountain road is the actual Pink Mountain. From there begins one wild drive strait to the top. Maybe through luck, or just complete lack of regard for my vehicle, I made it all the way up.

On the summit the wind howled in my ears, fog streamed in, funneling across the mountain as if it were a river. The temperature was barely above freezing and it felt like I was on some alien landscape. Perhaps fitting as sometimes I think of Ptarmigan as alien birds when compared to the birds which inhabit the more accessible regions of British Columbia. I felt like the mars rover trudging around the mountain squinting through the icy winds.

Two hours later and still no sign of any feathered ground walkers, it was as if all my luck had run out. I was digging down deep and still coming up empty at every turn. I felt like the magic had worn off this trip and now I was having to face the cold reality that I was not going to see all the birds I needed, and it looked like maybe even less than I had expected.


The drive down the mountain was a long one, it started to rain again, and I was losing hope in both the weather getting better, and in my prospects of a successful big year. When I was almost back to the highway I glanced at a field and spotted a family of Sandhill Cranes. At first just the two parents, but I gasped when I saw the little orange fuzzball peeking out from the long grass. I'd never seen baby cranes in the wild before(I don't consider Reifel Cranes wild).

I started to realize after this encounter that regardless of the final number, reaching 350, breaking a record, or failing miserably at both, the real reason this would be a success was that I had experienced all of it. I had seen more sights, more sounds, more irreplaceable memories than most people would in their lives, more than certain people would ever know could exist. As long as I had the will, the way, the drive, and the ability to overcome these bad times and just enjoy the ride, it would all work out in the end. 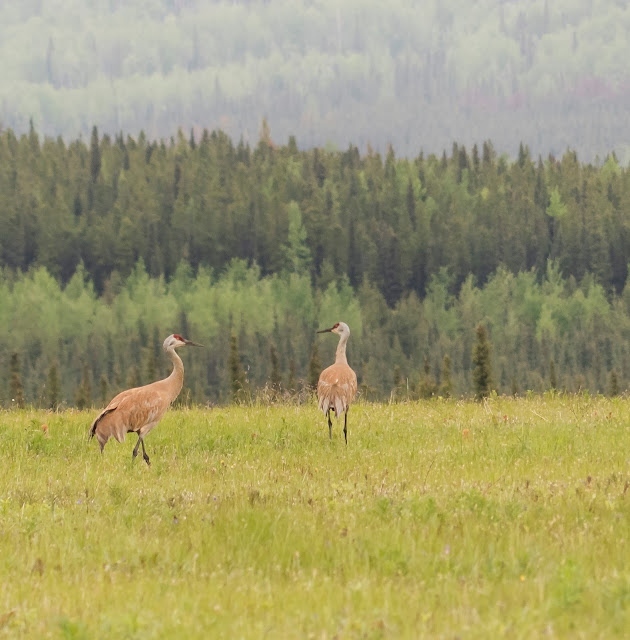