Birders in my opinion feel the change of season's much more early and dramatically than regular people. While people in February are in their depths of despair over the seemingly endless cloudy rain or snow filled days, we are proclaiming spring has arrived! with the first sighting of a Tree Swallow or song of a Red-winged Blackbird. And in August when people are just getting started on their sun tans and hours of beach side lounging, we are already lamenting on the end of it, the forests have become silent and we await the influx of Shorebirds.

This is how I felt this August morning, as it was the first time I really felt like Summer was over, after waking up morning after morning to birdsong, today it was almost dead quiet. The silent forest almost deafening. I felt a little melancholic as I began my hike.

The first 30-45 minutes is uphill through a giant burn, fireweed and other wildflowers added a stark contrast to the black and white charred spruce. I kept my eyes open for the shapes of Owls perched high up, It didn't seem like any were around, the hill began to get steeper and turn into switchbacks, after moving up a particularly big switchback I stopped to catch my breath, I turned around to survey what I had just ascended when I noticed right above my head, a Northern Hawk Owl drowsily staring down at me.

My eyes just about popped out of my head, to think if I had been in better shape I may not have stopped. I'm pretty sure this is a Juvenile Bird, he doesn't seem to have the complete look of an Adult, not to mention the way he is sitting is not the typical Hawk style. I tried locating the rest of the family but had no such luck. 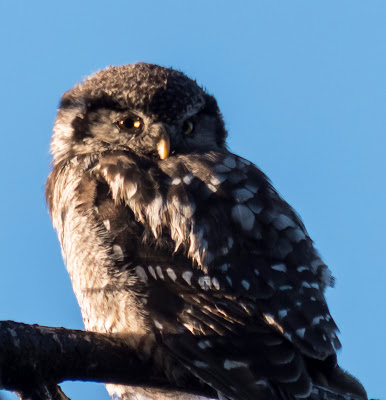 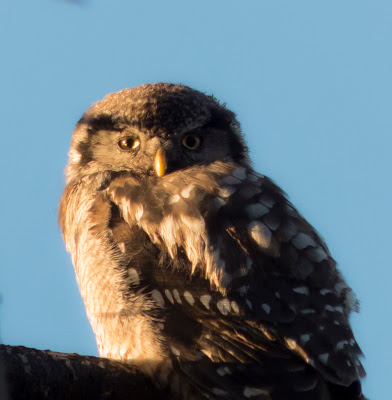 The burned forest soon subsided into living trees, the trail passed through numerous spruce bogs, each one containing a rather angry Solitary Sandpiper who decided to fly into the nearest tree and peep away at me.


This brought in a surprise Northern Waterthrush, who seemed to be curious as to what the fuss was about.


This must have been a bird migrating through as this wasn't typical Waterthrush Habitat. Shortly after I noticed a couple other birds in a spruce, and they turned out to be Rusty Blackbird! Another target bird! Further along I surprised a mother Spruce Grouse with a chick. Grouse number 3 of the weekend.


A couple Blackpoll Warblers were still around in the spruce, it was nice to see them again, the hike itself was almost too easy, after a few hours I had made it into the Alpine, from my vantage point it seemed I was surrounded by peaks in every direction, the Rainbow Range the closest ones.


It was time to do some Ptarmigan hunting, I combed through the rocky hills and alpine meadows, A horned lark peered down at me from above, Spotted Sandpipers flew about, while Hoary Marmots announced my arrival at each set of new rock slides.


Sadly no sign of Ptarmigan, after a couple hours it was time to turn back, I was a bit dismayed but 2/3 as they say "ain't bad".

Walking back, I took a different route down through some alpine ponds, at the edge of one of them, in some wet grass I noticed a shape I at first thought was a duck. When I had my binoculars on it I quickly realized it wasn't a duck at all but a Ptarmigan! But what kind? My first area of focus was the tail..No white outer tail feathers, could it be a Rock Ptarmigan, I noticed another shape, and another it was a family, finally I got close, and realized it was a Willow Ptarmigan family.

Not what I hoped for but still a bird to see. This had been one of the best hikes I'd ever been on, at least as far as bird life was concerned, a total of 32 species seen, not bad for an August day. The way back was pretty quiet except for a pair of Black-backed Woodpeckers, which was nice to see, since I had not seen any since my March visit to Cranbrook.

By the time I reached my car it was afternoon and I was dog tired, it would be a long drive back to Williams Lake, along the way I checked Eagle Lake, hoping for some interesting shorebirds, my previous visit I had noted it should be a good place for them later on in migration. My idea turned out to be incorrect as there was not one shorebird about, The two Arctic Terns were still there however, in exactly the same place, not sure if they nested this year or just rested. A flock of Bonaparte Gulls were also on the lake, but not much else.

When I finally got back to Williams Lake I checked my phone to see a Red-necked Stint had been seen at Boundary Bay...I was dismayed. Again i leave and something crazy shows up. My being out of town was becoming a good luck charm for the rest of Vancouver's Birders.

Well here I was stuck up in Williams Lake, I still had 3 more days of birding in the interior, and at this point I couldn't just go back for a bird that may or may not be there, I felt a little deflated, I drove to Kamloops for a restless night.
Posted by RyJay at 5:41 PM