I awoke at 6 am ready for action, last night having failed at owling i was chomping at the bit to add more species to my year list. The winds in Osoyoos were howling and my hands were already frozen just walking out to my car. My first stop would by Anarchist Mountain.

Driving up to Wagon wheel road I became uneasy as the skies filled with snowflakes, I was dismayed to find very little in the way of birds, a few Williamson's Sapsuckers and a Sharp-shinned Hawk were the only notable species. I turned around and drove towards Oliver.

My next stop was Haynes Lease, its one of the last pure grassland areas left in the Okanagan, bordered by giant cliffs locally known as "the throne". It wasn't long until I heard my first Canyon Wren, its lovely song cascading down the the closest rock face. I scanned the skies above the highest peaks hoping for White-throated Swifts, but only had a Red-tailed Hawk and a Common Raven. Western Bluebirds were plentiful in the tops of the few Ponderosa Pines that dared grow. Their chattering along with Western Meadowlark song serenaded my walk back to the car.

I checked the oxbows around rd 22 hoping for the Pelicans that had been reported a week earlier, I came up with not one. Loads of swallows, Violet Green, Tree, and Rough Winged had congregated along the River. A Peregrine Falcon did a fly by, my heart jumped when I first saw the Falcon hoping for Prairie but they were soon dashed when my Binoculars focused on the bird.

I carried on hitting up Mahoney Lake, the forests surrounding the lake got me my first Pygmy Nuthatch, and my 200th species of the year! Nearby White Lake was virtually empty except for some Bufflehead. Walking along the trail I flushed a Lincoln's Sparrow, it nervously chipped with a raised crest not happy i had flushed it.

I enjoyed a Say's Phoebe looking really cute and fluffy as it called perching upon the old coral
. Western Bluebirds and Yellow-rumped Warblers were abundant in the giant Sagebrush lining the lakes.

It was already 4pm and I was off schedule, I decided I had to just motor myself up to Kelowna and Robert lake as fast as I could to get the American Avocets. I made it to Robert lake around 530, the first time I had ever been. It was interesting to see that the viewing area consisted of a small patch outside of a fenced off low level lake. Definitely not the sort of bird sanctuary I'm used to.

A young birder was already there, i recognized his name from the BC Bird forum. Logan Lalonde, I marveled at how good of a birder he already was at such a young age. Reminded me of when I had just started birding. The Avocets were definitely not hard to spot out, right out in front of me, 15 of them danced around the edge of the water. 3 Lesser yellowlegs with one Greater tagging along soon flew in. The water was teaming with Swallows, and I managed to scope my first Cliff Swallow of the year.

From the Ponderosa Pines we both heard a Western Wood Pewee calling, awfully early I thought, now there were European Starlings around, but they were in a different area and it seems as though the Pewee call was coming from a different direction then the Starling calls. I learned later that these guys were notorious for tricking birders with their Pewee imitations so I recounted my observation, I don't need any asterisks on this Big Year.

All and all it was a great pleasure to meet young Logan and nice to see some B.C. Avocets, Logan mentioned a few places I could check for Pelicans, and I tried all of them on my way back to Penticton, sadly I missed them yet again. I spent the night Owling around White Lake and drawing blanks on Western Screech Owl yet again.

Monday I birded my way back to Vancouver, I was shocked that I still hadn't found White-throated Swifts or Chukar yet. I hit up the Vaseux cliffs again in hopes of finally nailing these birds down. This time the Swifts were right where I had expected, their odd trills alerted me right away. I watched them careening through the skies. These are one of my favourite birds, and it was a treat to see the fastest flying bird in the world.

I moved on from the swifts to scoping the cliffs in a vain attempt to spot a Chukar...still nothing, a Coopers hawk flew by and another Peregrine, it all seemed like I was going home empty handed until a Bald Eagle soared overhead, almost instantly I heard a weird Grunting rattle, definitely a foreign sound to me, I followed the sound climbing up as close as I could get to the cliffs. It was almost impossible to pin point where it was coming from as the echo's and reverb of the call played tricks on my ears. I was resigned to this being as close as I would get to a Chukar today but as I was about to leave, I heard the ruffle of wings and a gorgeous Chukar popped up from a bluff, still calling. YES!

I spent a long moment admiring the chunky game bird until it again disappeared behind some rocks, I got to my car and realized...I didn't have my keys! I searched every pocket twice over as my mind churned out the worst possible scenarios. I dropped them in between the rocks I was climbing on, that Magpie that was following me picked them up and added them to its collection of shiny prizes, I would have to walk to Oliver..and how would I have a new key made? I told myself to remain calm as i retraced my steps, frantically searching the ground and rocks for the keys.

I was almost about to really panic, and then dear lord i saw them in the grass. I had a good laugh to myself as I bucked it back down to my car. Crisis averted.

I spent a few more hours birding at different stops on my way back to Vancouver, the original plan was to take an alternate route from Princeton over to Merrit, and then to Spences Bridge, but when I was in Princeton i checked the vanbirds group to find that the Dickcissel had been seen at 2pm. It wasn't a hard decision to give up the alternate route and make a B line to Ladner. I filled up my car, and drove straight all the way into Ladner, thankfully making it before my lower half was completely numb.

I pulled up to the street where it had been reported, there were already 6 birders lined up outside the property. I asked if anyone had seen it and they said I just missed it..it was holed up in a Rhodedendron bush, I waited anxiously as the sun kept setting, 20 minutes later someone gasped. The dickcissel had flown up into a maple tree. I quickly fixed my binoculars on it just in time to see it fly up again into a larger willow tree. I got to see it for a mere few moments, a beautiful female...and then it was gone. What a weekend. 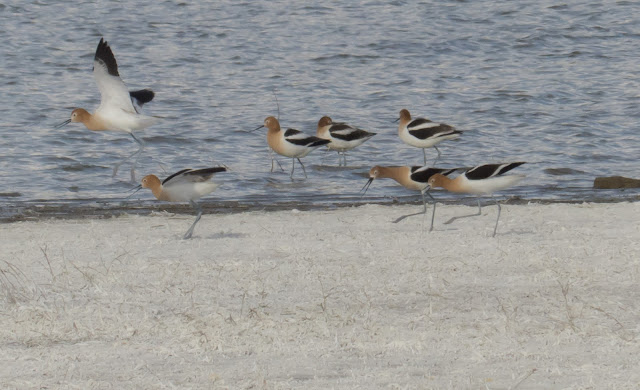