While I was in California I did manage to go on a few birding excursions, in between graduation ceremonies, wine tastings, and family dinners. My time was limited to the San Jose area, instead of detailing each day I will just review some of the better locations in the vicinity.

San Jose may not be on the radar as a priority destination to Canadian Birders, but birders would be surprised to find out it is actually a wonderful area filled with a variety of habitats and parks. The hills surrounding the bay area contain a few large state parks and natural areas that are almost devoid of people, and many of the California specialties most sought by listers are most easily found here and the surrounding Santa Clara County.

Located in the hills on the way to Mount Hamilton, Joseph D Grant encompasses a massive area containing a variety of habitats. Rolling dry hills turn to Chaparral, Creeks flow through the center creating riparian areas, while two lakes draw shorebirds, and herons. Another highlight is an old heritage house with a nice fenced in garden, the centerpiece a large bird bath where you can sit on a bench and watch a variety of birds take a dip. While I was there I had Anna's Hummingbirds, Lesser Goldfinch, House Finch and even a Bullock's Oriole.

The highlights of my times birding here have definitely been the abundance of Lawrence;s Goldfinch. These are the least common of the three Goldfinch and can be difficult to find year to year. The last two years I've birded Joseph D Grant, I have had Lawrence's Goldfinch. This time I had at least eight of them, hopping around the parking lot. Black Phoebes were all over, calling and flycatching, while Quail and Wild Turkey Called from hidden places.

Another species I added to my life list here a year ago, and saw again this May was the White-tailed Kite. From a horse field I watched one hover, dive down and come back up with a rodent of some sort. It was a delight to see such a gorgeous bird of Prey.

Around the Lake, Great Egret;s were plentiful as well as Ash-throated Flycatchers. I spied a family of Killdeer, and Bullock's Oriole's chased one another from the large cottonwood trees. Other birds common here are Oak Titmouse and Red-shouldered Hawk.

Ed Levin is more of a city park, people like to go there to fish and walk their dogs, but compared to a park in Vancouver its downright empty. One of the main attractions of this park is the lakes that attract Green Heron and Black-crowned Night Heron. As well as Forster's Terns. The larger deciduous areas produce Nuttall's Woodpecker. It was at Ed Levin where I got my first Tri-coloured Blackbird, my second lifer of the trip. At first it seemed impossible to pick one out of the hordes of Red-winged Blackbirds that were gathering up for the night in the reeds. Just as I was about to give up, I heard that weird toy gurgling song only Tri-colored Blackbirds make, and soon after I had zoomed in on a lovely male.Interesting thing about the Red-winged Blackbirds in California is they are a subspecies that lacks the yellow median covert, they only have the triangular Red Patch on their wings

This is a winding trip through the hills above the Calevera's reservoir. It is a must if you are wanting Yellow-billed Magpie. I had at least 15 along the 30 mile drive through the hills, you also have the choice of continuing to Del Valle Lake, which is also good for birding but is a pay park. I had my first California Thrasher close to here, a bird I had missed 2 other times I had been birding in California

Sunol Wilderness is blessed with a bunch of hiking trails that can take you through many different habitats. possible birds would be Sage Sparrow, Rufous-crowned Sparrow, and if you are lucky Black-chinned. Turkey Vultures are everywhere and unlike in BC, they are pretty tame. I found myself surrounded by 5 of them in a grove of trees. I admired these oddballs while they stared down quizically at me. 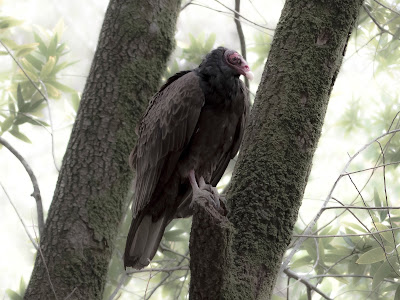 Don Edwards would be the crown jewel of the Bay Area. Boasting one of the few breeding locations for the California subspecies of Clapper Rail, as well as Snowy Plover. Least Tern stage here later in the summer, and sometimes even Black Skimmer is possible.

I chose this location to introduce my girlfriends family to birding. They had asked me to take them out birding while I was visiting, I chose Don Edwards because of the variety of larger birds I could actually show them. Most people birding for the first time don't wanna stand around a bush waiting for a Wrentit to make a move. So they stood in awe as a White Pelican flew over our heads, and marvelled at the Snowy Egrets, and Black-necked Stilts, American Avocets, and nesting Forster's tern.

Though none of the birds matched their love for this California Ground Squirrel. 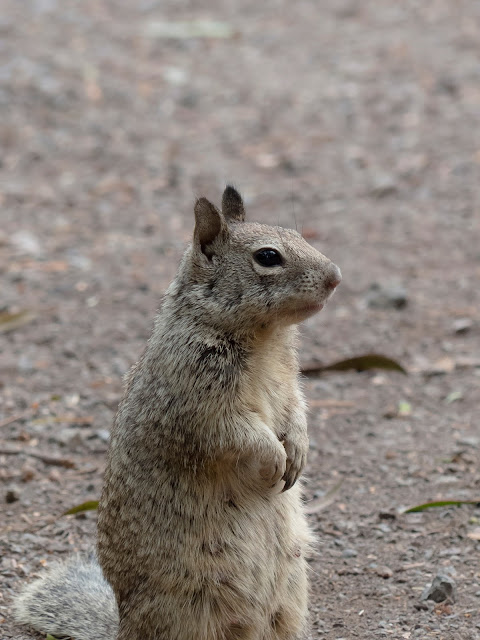