Stuck inside of Creston with the Forster's Bues again

I should just make every post title a play on a Bob Dylan song..
Well i tried writing a blog post about my last bird adventure in May before leaving to California but for whatever reason I just didn't have the inspiration, maybe because so much time lapsed, also California has a lot of Wine, and Wine tasting...
Anyways I will just do a quick update on whats happened on my Big Year since last I posted.

I started out going to Salmon Arm for Clark's Grebe. This is the only location where you can regularly see them in B.C. I was lucky enough to meet another birder already scoping out the Western Grebes.
of which there were atleast a hundred in the reeds at the edge of Shushwap Lake. Luckily he had already found the Clark's minutes earlier. I'm a great scavenger birder... The birder I met was named Randy and i already knew who he was because he was only 1 bird behind me on ebird for birds of BC this year, it was nice to meet a new birder, and after walking along the boardwalk admiring the Cliff and Barn Swallows, and this nice Myrtle Warbler I took off to the Okanagan.


I hit up Robert's lake in a vain attempt to see a Black-necked Stilt or other rare shorebird, but it was pretty quiet, there were some Avocets sitting on nests, which is always fantastic to witness.
Spent a while at Kalamalka Lake, one of my favourite places in the North Okanagan. Bird life was limited due to the heat, I did get a nice Lazuli Bunting, but the highlights were photographing the lovely Yellow-bellied Marmots.

I then found the Catbird down lower as it came into view. Very nice!

Afterwards I hit up Mckinny Road in hopes of some higher altitude birds like Olive-sided Flycatcher, it was fairly quiet up there but I did manage a Gray Jay. 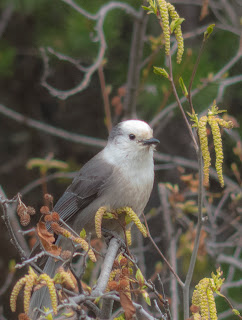 In the evening I headed up Max Lake to hopefully get Flammulated Owl. Randy had told me he had one the previous night, so it seemed like the best spot for it. As the sun was setting Calliope Hummingbirds were doing flight displays. They would buzz straight up into the air and slowly raise themselves down lower and lower like a helicopter.
Further up the trail I ran into a crowd of birders. They had been participating in the South Okanagan Big Day. They were lead by Mr. Russell Cannings himself, at this point in the game it had been 25 kilometers of walking, I was in awe. It turns out they were looking for the same Flammulated Owl as I was. As the darkness set in the Common Poorwills began calling. We all waited quietly for that Flammulated "hoot"

It seemed as though not even Russells inspired mimic calls would not even get one to pipe up. While we turned to walk back down to our cars a birder stopped and shouted Flammulated! We all stood around with our ear's pricked up..and finally a hooting flammy was heard way up on a rocky hillside. Amazing!

I thanked the birders and headed down to White Lake/Fairview road in hopes of lucking out on a Western Screech Owl. Although I never heard one, I ended up seeing 3 Great Horned Owls pearched on powerlines along Fairview Road. I heard another one by Willowbrook, as well as hearing another Flammulated Owl! Easily the best night of Owling I've had.

Sunday Morning I hit up the South Grasslands in hopes of Grasshopper Sparrow or an early Sage Thrasher. I checked out Nighthawk Road and the Spotted Lakes area. There were 3 Avocets at Spotted Lakes, a new location for me. I checked out Blue/Kipoola lake and though I didn't find the target birds I did managed to come accross this lovely little fawn hiding in the grass.


Shortly after I took the second picture he darted up and ran off towards his mother somewhere in the Brush.
It was another amazing encounter with nature, of which I have already had so many this year.

I finished off checking out the benchlands of Osoyoos, nothing too exciting but was able to get some good looks at Western Kingbirds and Bullock's Oriole.

Finally to finish this weekend I headed on to Creston. I made it there around 5pm, which gave me enough time to check out the Wildlife Management Area. Of course it wasn't long before I found a nice Western Painted Turtle sunning himself on the side of a road.
At Duck Lake there were no Forster's Tern's, I had hoped to get them so I could move on and hit up cranbrook on and loop around back to Vancouver, but as the sun faded over Duck Lake, I knew I would have to stay in Creston and try again in the Morning.

The next morning I drove that terribly rough Channel Road, and I thought about how I never wanted to drive this road again this summer. It had been the 5th time I had done this already this year. When I got to Duck Lake, I scanned the marsh, and the lake, but there was nothing. I felt that old impending failure filling up in my lungs, but then heard a :"Kreeer" over my head, I looked up..and there they were 5 Forster's terns careening through the air, they followed a path that took them over the lake and to the other side. Success!

I spent the rest of the morning around West Creston Road where I managed to get my first Red Eyed Vireo of the year, as well as this lovely American Redstart.

It was a Wild Weekend for sure, but now I was at 261 birds, and felt a little better about leaving for California until June. Its now June 3rd and I am planning a one day blitz of the Okanagan on Saturday, This will be strictly for Sage Thrasher and Grasshopper Sparrow, the last of my Okanagan specialties, and two birds I have never seen before. Wish me luck.
-Ryan Edward Johnston