Turns out that insect-like buzzing was really an insect

Sage Thrashers and Grasshopper Sparrows. Those two mysteries of the south Okanagan, like ghosts they haunt the sagebrush. How many times have I driven Nighthawk Road in the hope a note of a Thrasher's song my hit my ear? How many hours had I trounced the dirt trails around White Lake? Scanning the grasslands, hoping to maybe flush a sparrow that would turn out to be a Grasshopper. Following each insect like buzz...to find an insect behind that buzz.

The Okanagan Valley has garnered a mythical reputation as British Columbia's arid oasis, a hot spot filled to the brim with specialty birds. In most ways its valid. But in other ways its a hold over from the 60's and 70's when maybe you could find a nest of White-headed Woodpecker, easily walk through the grasslands and see a dozen Sage Thrashers. Walk road 22 and hear the buzzing of a dozen Grasshopper Sparrows.

As a young birder reading the guides, and books about the Okanagan, it felt like all I had to do was show up in the right area and find my birds, but its not so easy, in fact in 10 years of trips to the Okanagan I only this year found things like Yellow-breasted Chats, and Gray Partridge,. Now as I drive towards the okanagan, I feel like I am in a hostile place where red block letter signs scream "No National Park"! As if somehow protecting the last vestiges of the rarest of an ecological masterpiece  is a direct threat to everyone's livelihood. As if putting a limit on Wineries flies in the face of peoples god given right for more and more and more.
.
When you go to Vaseaux Lake or other parks in the Okanagan  you see interpretive signs showing White-headed Woodpeckers, and Sage Thrashers, and Grasshopper Sparrows, Burrowing Owls, all birds that either don't exist here anymore, or barely do on a peripheral extension of their ranges. You could add Sage Sparrow, Black-throated Sparrow, and Loggerhead Shrike to these signs and maybe have the same amount of change of seeing them. I'm not really sure what I'm on about, sometimes I think the way the Okanagan promotes itself to the birders, is not very realistic. 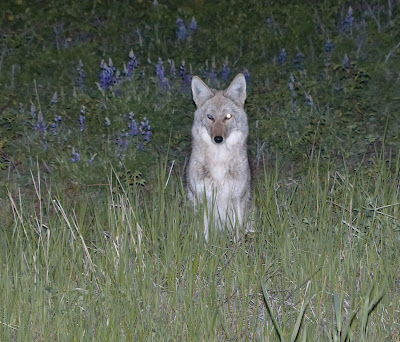 I left Vancouver after work 8pm, along the way I had a close encounter with a coyote crossing hwy 3. Most coyotes wouldn't give to stares before bounding off into the forests. Mostly because they are openly shot by farmers/hunters whomever has a gun and feels like killing one. There is no regulation on Coyote killing, they are considered pests, though they are no different than your pet dog, other than they are smarter, and wild.

This coyote was curious, maybe because it was pitch black and he was unaccustomed to cars stopping for him. He sat in the grass and watched us as we watched him, both of us as curious as the other. 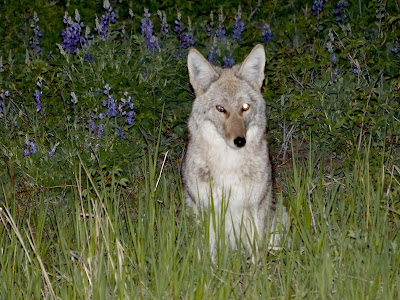 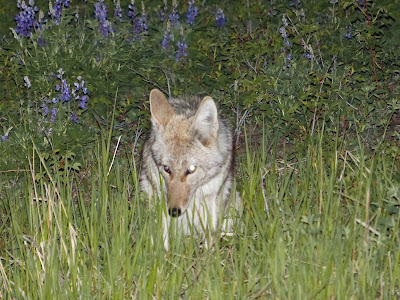 I slept at nighthawk Rd. When I awoke the sun had not yet risen, but the grasslands were alive. Meadowlarks, brewers, vestper and chipping sparrows. The nasal Peent of a common nighthawk, i looked up and saw it batting across the skies.

for two hours I combed nighthawk roads sageland. careful to listen to everything and note every movement and every bird...there were no thrashers, and no grasshopper sparrows. At White lake it was pretty much the same.

I did have a few other birds to see. Black-Chinned Hummingbirds, in Oliver river road. an easy score, as well as Olive Sided Flycatcher on Sidley Mountain. I checked for very at every streamside thicket, but maybe the 27 degree weather had withered away all bird song.
I also needed black swift, but the lack of clouds probably had them up so high they were near space.

I had left at 8pm and was back home in Vancouver by 8pm the next day, a total 24 hour bird blitz. There had been success, failure, uncertainty, and more exciting and intense encounters with nature. My big year has been filled with many such moments but I think that on Sunday after hearing from Russ Cannings that a Sage Thrasher had been found by him, singing literally a 100 feet from where i had slept the night before, it was the first time I questioned my own ability. As in was I good enough to even do this?